I am home from China where on Saturday I competed in the ITU Premium Asian Cup in Chengdu. Before I get to the race I will just give you a quick rundown on what we experienced there. For those who have been to China, you would understand that when the Chinese decide to do something, they do it BIG!!! And this race was no exception....

With this event being the unveiling, the Chinese built an entire ‘Triathlon Venue’. It included a giant manmade lake, a closed road cycling track and an enormous grand stand. This venue is a dedicated Triathlon venue and I don’t think I have ever experienced anything like it before.

As I mentioned previously, China (and Asia in general) usually throws up a whole bunch of challenges to overcome for the race including the heat, language and cuisine. I felt I had prepared much better to face these this year after my experiences in Jiayuguan in 2011 and it turns out I was right. I never had to resort to eating only rice and Oreos :)
So fast forward to race day....the guys were up first and I rolled down to the race to be greeted by what I was told was 100,000 spectators.....it was absolutely crazy with so many people and so much noise, plus the Chinese locals love Aussies so you feel like a bit of a rock star with the amount of people who want autographs and photos with you!

My race had a couple of good points and a couple of bad ones. As has always been the case in this ITU gig, my swim is my Achilles heel and it proved to be the case again. While I was a little closer to the front pack than usual, I was still not there and I exited in the 3rd bunch. I think I made a bit of a tactical error at the beginning by following the wrong feet and might have been able to make the 2nd pack should I have had approached the start a little differently, alas hindsight is a wonderful thing. Onto the bike and the chase began in earnest, thanks to all the long course riding I’ve been doing I was feeling exceptionally strong but with a very un-cooperative group my efforts were to no avail. Finally onto the run....in some previous races where the heat and humidity have been high, I have really faltered here with a couple of DNF’s or 40+ min run times due to some pretty bad cramping. This was another positive of the race was that I have managed to eliminate that cramping from me....I came up with a slightly odd solution to the problem in March this year and have tested it at every race, now after a couple of Olympic distance races, a 70.3 and the final test, a race in extreme heat and humidity, I can say that cramping is no more. So back to the run, thanks again to the long course training I have been doing I felt strong and could have started the run all over again when I finished. What I have been doing though has not super fast. I ran across the line in 32nd place and was pretty devastated to say the least.
Upon reflection with Coach Matty I had an on par race considering the style of racing I’ve been training for and have taken some good positives out of the experience.

On a side note, I would also like to let you all know that my girlfriend, Brooke Langereis also finished her first ITU event, coming in a very strong 11
th place. At the beginning of the year, after two major operations to fix blood clots, including the removal or two ribs, she is back training exceptionally well. She had a solid swim, exiting in the 2nd bunch. On the bike she rode very strong and they managed to claw back the front group on the final lap of the bike. She posted a solid run to finish and was extremely happy with her first event.
For me I am now head down, bum up with just over three weeks til my next race, the Forster Ultimate Triathlon. This will be a great test with a very challenging 2km swim, 120km bike and 20km run to finish. 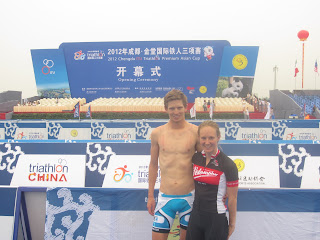 Posted by BennyHTri at 5:48 PM